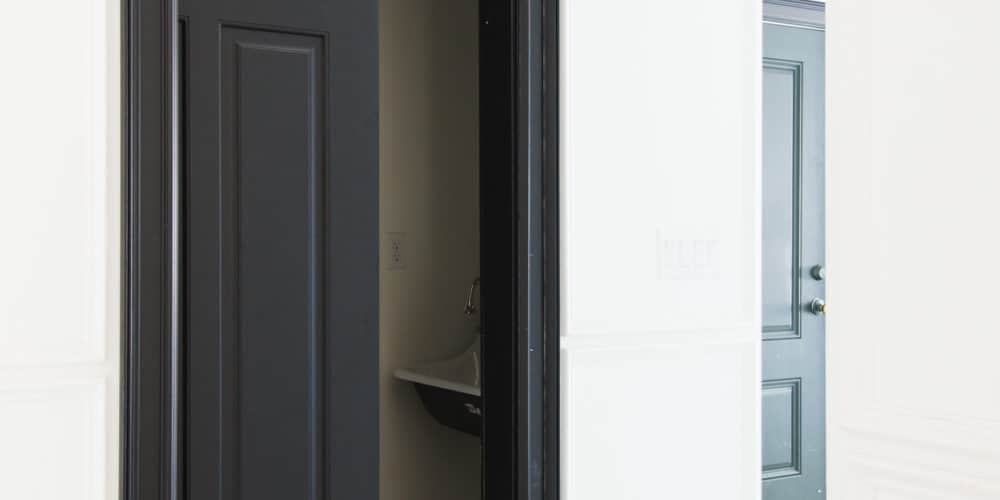 Pocket doors were popular in the last part of the 19th century and the first part of the 20th century. Their main function was to close off a parlor, den or sitting room when it was not being used. In the winter months, doors to unused rooms could be kept closed, so the rooms did not need to be heated. Closing off the rooms would keep them cleaner at all times of the year, especially in the summer months when open windows would allow dust to blow into the rooms if the doors were open. When guests were expected to call, those closed rooms were opened and aired. When the guests arrived, they were shown into the sitting room or parlor, because it was usually the best room in the house.

However, architects and builders began leaving them out of the new homes they built, and the trends were to use the type of doors that swing open and closed. The companies that manufactured the hardware for sliding pocket doors stopped making the good quality hardware and went out of business. After that, builders had to buy the hardware from lumberyards, and the quality was poor. Homeowners who installed glass pocket doors with inferior hardware then had problems with them. The doors occasionally came off the tracks inside the walls and got stuck there. The doors sometimes rubbed against the frames when they were opened or closed and got scratched. When the doors were closed, they rattled if open windows in the house caused drafts or when an outside door was opened and closed.

Fortunately, there are now some companies that manufacture high quality interior pocket door hardware that performs well and does not have any of the problems associated with the poorly made hardware from a few decades ago.

There are many advantages to having pocket sliding doors in homes and other buildings. An armoire pocket door glides into a hollow space in the wall at the doorway and is hidden when it is opened. The space saved by not having a door swing open can be as much as 15 to 20 square feet. The area where a normal door would swing open, preventing the placement of furniture at that location, can be utilized if the door slides into the wall. It is easier for someone in a wheelchair or using a walker to open a double pocket door. It slides smoothly into the wall and out of the way instead of swinging towards the handicapped person and forcing him or her to back up. If the door swings away from the person, he or she has to manage to keep it open while moving through the doorway, and then let the door slam shut or leave it open. If you have exterior pocket doors, your house does not seem as cluttered as it does with regular doors. It seems that people tend to leave caps, coats and numerous other items hanging on doorknobs, because they are handy for that purpose, but it makes a room look messy.

You can build your own frame kit for a hardware pocket door or purchase a ready-made frame kit for it. If you have a brick or cement wall, you can install a sliding glass pocket door with the framework on the outside of the wall instead of the inside with a wall mounted frame kit. The door will not be hidden when it is open, but otherwise it will function the same as one that slides into the wall.

You can purchase different types of closing hardware for your wood pocket doors. The least expensive hardware fastens the door to the jamb without locking it. One type of door lock operates by turning a latch from one side for privacy, or for the highest security, you can get a lock and key type of hardware for your antique pocket door.

It is easier to install cabinet pocket doors as you are building a new home, but if you want to include a custom pocket door in a remodeling project, do not disassemble a load-bearing wall in the process or place it in an area of the wall that has plumbing or electrical wiring in it. If that is your only choice for installation of the door, use a wall mounted pocket door instead of one that fits inside the wall. Make sure you paint or varnish the door before installing it in the framework, because after it is installed, it will be hard to reach the entire door with your paintbrush.

Pocket doors come in all types of wood and styles with prices comparable to regular door prices. You can even choose French glass doors with wood frames. However, the hardware required to install exterior sliding pocket doors will be more expensive than that for traditional doors, and installation time will be longer. In spite of this, when you consider the conveniences of patio pocket doors, you will get a good value for your extra effort and slightly higher cost.