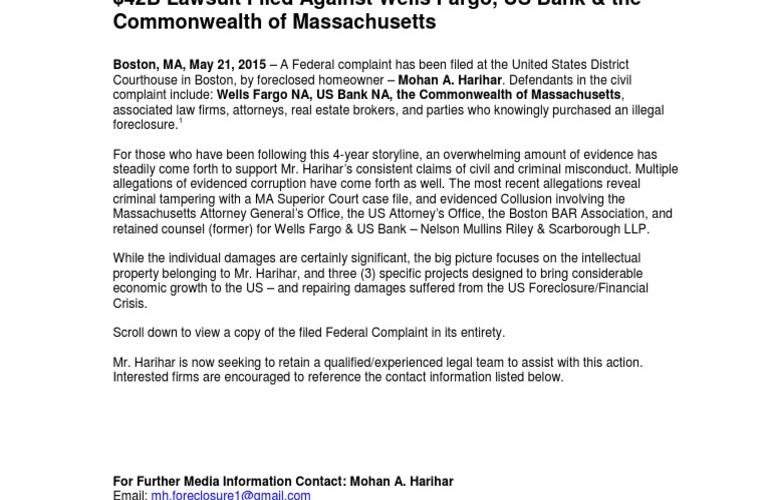 Today, the nonprofit group known as National Fair Housing Alliance filed a discrimination complaint against the mortgage lender, Wells Fargo. The complaint was filed with the US Department of Housing and Urban Development, better known as HUD. This complaint to the US government accused Wells Fargo & Co. of failing to maintain the upkeep of home that were foreclosed on in minority communities. They allowed the abandoned properties to become run down and turn into community eyesores. According to the complaint, foreclosed properties that were left vacant in predominantly white neighborhoods were not left in such a disgraceful manner. These vacant properties have been maintained in away that doesn’t make the communities look bad.

According to the President of the National Fair Housing Alliance, Shanna Smith, the differences in the way Wells Fargo treated vacant foreclosures in these different geographical areas were obvious. In urban communities, they neglected simple things that could have been maintained. They didn’t perform any type of routine maintenance on the properties. They also made no effort to keep the properties secure, which is the main cause of vandalism when it comes to vacant homes. This neglect was noticed in both African-American and Latino communities “across the board”, Smith reports.

This isn’t something that the group just arbitrarily decided to complain about. The official complaint is based on years worth of investigations tracked by the non-profit group, who serves as an advocate for minority related housing issues. The investigations were performed in an effort to discover just how major lenders like Wells Fargo maintain and market REO properties in different real estate markets throughout the US.

In the National Fair Housing Alliance’s complaint filed with HUD, they that they completed and independent investigation on Wells Fargo owned foreclosures. They found that serious inequalities existed when it came to the way the lender maintained and marketed homes that were left vacant due to foreclosure. They came to this conclusion after comparing these practices with the way Wells Fargo maintains and markets vacant homes in non-urban communities.

The Study on Wells Fargo

The National Fair Housing Alliance investigation covered foreclosed homes in eight US cities, looking at about 218 of them, all owned by Wells Fargo. This eight cities were:

National Fair Housing Alliance used different statistics from the years of investigations to accuse Wells Fargo of discrimination due to taking better care of the non-urban communities. According to their statistics, 56 percent of the vacant foreclosures in the urban communities had large amounts of trash that was piling up on the premises. This was in contrast to the only 30 percent with the same problem in predominantly white communities.

In Smith’s statement, she says that she was completely surprised at the discriminatory findings of the report against Wells Fargo. But, she saw the problems first hand. Upon driving through many of these minority areas, she saw weeds overgrowing in front of foreclosures that didn’t even have for sale signs in front of them. According to her, many of the REOs look outright abandoned.

Earlier this month, National Fair Housing Alliance released a report on the subject. They blamed the entire banking industry for the discriminatory actions. They believe that these banks should be responsible for maintaining their foreclosed properties. The report gave actual details of how the banks were handling, or rather not handling” these properties, and how they put no effort into marketing them. This leaves these communities looking bad as the homes continue to deteriorate and look abandoned, with someone who may be interested in purchasing one having no idea who to call to get the ball rolling.