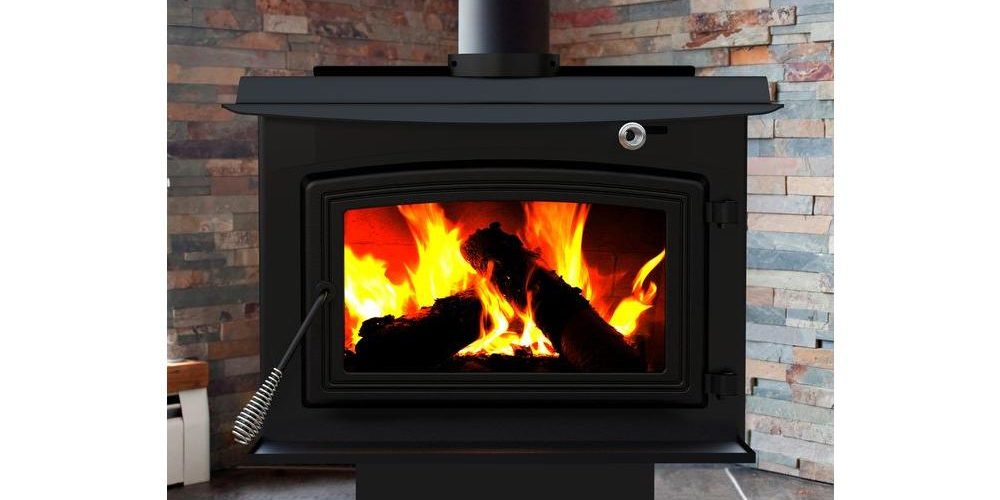 Log or wood burning stoves have been around for centuries. It is still possible to obtain wood for free, so stoves that use wood for fuel are the most economical ones to use. They have also become more efficient, modern stoves being constructed of materials that radiate the heat better. Log burning stoves come in many designs and are used for both warmth and cooking.

Styles of these stoves range from a simple fireplace insert to a large kitchen style that cooks, bakes, heats water, and heats the house as well.

A fireplace insert fits into an existing fireplace to contain the heat produced by burning logs and reflects it back into the room, making the fireplace more efficient. These start at about $70 for a basic reflector and can cost up to $5,000 or more for an elaborate one constructed of heavy duty welded cast iron and high temp ceramic glass. Fireplace inserts are also designed to be attractive and add style to a room. The higher-end inserts burn wood very efficiently, and can put out as much as 60,000 BTU’s (British Thermal Unit) under optimum conditions!

The next step up from a fireplace insert is the little “parlor” stove that has been around for centuries. These were originally constructed of cast iron with a pipe “chimney” leading to the roof to vent gases and smoke.

Cast iron is still used for log burning heating stoves because it is a strong material that adapts to changes in temperatures well, can be easy worked with, it conducts and radiates heat well, and can be cast in any decorative style you wish. The only drawbacks are that cast iron is very heavy, and because it is cast, can be expensive to produce. Cast iron stoves can heat up 2,000 square feet of space, and produce as much as 63,000 BTU’s.

The more modern materials that log burning cast iron stoves are made of are: steel plate and soapstone. Welded steel plate is more easily manufactured than cast iron, as computerized equipment can be used. Because they are assembled by bending and welding, they need less maintenance than cast iron stoves. Double wall construction is also possible, allowing the stove to be placed closer to a wall and enabling convection. Many newer stoves will actually be a combination of iron and steel.

Log burning fuel stoves that are made of soapstone are also popular. Soapstone has the advantages of being relatively soft, enabling it to be cut and polished. Soapstone stoves are very beautiful, and each one is unique because of the variation in the stone used. The advantage of using this material for a stove is that it is able to absorb heat and then radiate it slowly over a longer period of time, resulting in a more constant room temperature. Because if this ability, soapstone stoves use less fuel as opposed to the other stoves, which require someone to feed logs into them at regular intervals to maintain the heat. The disadvantages of a soapstone stove; they take longer to heat up from a cold start, they are very heavy, and the temperature output is steady but lower than cast iron or steel, so they are not practical for cooking.

Many modern stoves integrate a combination of the three materials in order to utilize the best characteristics of each.

The real workhorse of log-burning stoves are the big kitchen models. These cook your food, warm the house, and, with a simple addition, some models even supply the hot water for your home. Despite modern technology, these stoves are still in use all over the country. Vintage models are still available for purchase and “state-of-the-art new ones are being manufactured. The big ones are constructed mostly of steel and utilizes modern design to improve heat convection. These stoves can get up to 600 degrees very quickly and heat up to 2,000 square feet. Large stoves like this also can accept logs up to 20 inches long which reduces the need to split wood to smaller pieces. As mentioned before, a reservoir can be added to the back of some models that will hold up to 24 gallons of water. These stoves are actually quite reasonably priced at under $3,000.

Overall, log burning stoves can be an excellent investment for those who appreciate the beauty and savings they can provide.