How to Cook Salmon on the Grill? 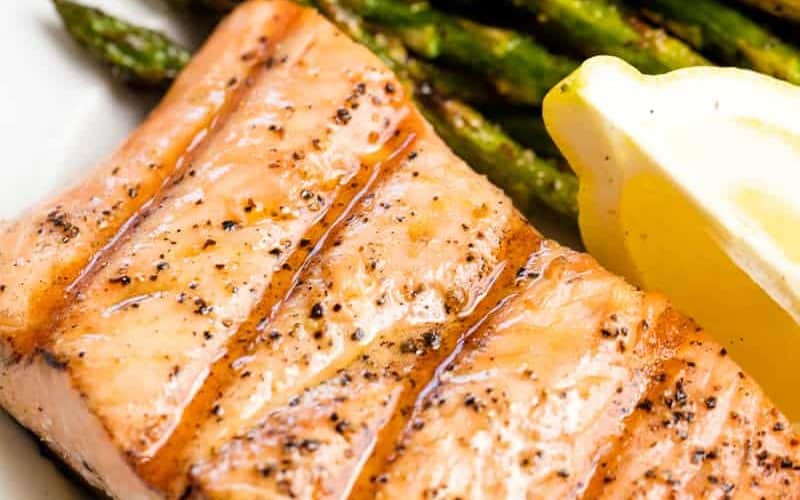 Salmon is a fish so perfectly adapted to grilling that one might be forgiven for thinking that it evolved specifically in order to find its way to the grill. Some varieties of fish are so delicate that they need split-second timing and careful handling or they flake apart at the slightest touch. Others are so oily that special steps must be taken to minimize their oily taste. Salmon is the best of both worlds and it is incredibly difficult to do badly.

In fact, the only sure way to ruin a grilled salmon is by serious overcooking. There are no hard and fast rules about cooking time, since the time required depends on grill temperature, which is a lot more variable than oven temperature, and on the thickness of the fish. In general, though, expect no more than three to four minutes per side.

Salmon should be cooked on a medium-hot grill and needs only a little salt and pepper and a brush with a touch of olive oil. It can be placed skin side down and allowed to cook with absolutely no intervention. It does not even require flipping, as it will cook through in about seven or eight minutes, although the result will be closer to baked than grilled.

Otherwise, start skin side down and flip the salmon over when its upper surface begins to look just slightly cooked. Salmon is done when it becomes a bit flaky and tender, but it should be taken off the grill before it cooks through, as retained heat will continue the cooking even after the salmon is off the heat.

In addition to the simplicity of the salt, pepper and oil approach, salmon works well with all sorts of herbs and spices. A teaspoon of rosemary, thyme or oregano can be added with the salt and pepper, or chili powder and cilantro can be used for a Mexican approach.

It is only slightly more complicated to apply a rub to the fish before cooking. This entails combining your preferred spices, using a mortar and pestle to blend them well, and rubbing the result all over the surface of the salmon before cooking. Rubs are a topic unto themselves, but they are another option that is hard to do wrong. For a basic rub, combine equal amounts of paprika, oregano and ground cumin with half those amounts of salt and pepper. Add a little cayenne and two or three cloves of minced garlic and there’s the rub. It can be applied just before the salmon hits the grill or up to an hour in advance.

Marinating the salmon before cooking adds a step to the preparation, but it pays dividends. Two simple possibilities are worlds apart in style but equally delicious.

For something Italian, combine olive oil and lemon juice in a two to one ratio, add minced garlic, oregano or basil, salt, black pepper and a pinch of crushed red pepper.

For something Japanese, mix soy sauce, a splash of rice vinegar, a bit of sugar and some minced garlic and minced ginger.

When using any marinade with salmon, the time spent in the marinade should be relatively short. Long marinades can turn the salmon mushy, so an hour or two will suffice. When the salmon is on the grill, the remaining marinade can be used to baste the fish, keeping it flavorful and moist.