How to Get Rid of Moles in Your Yard? 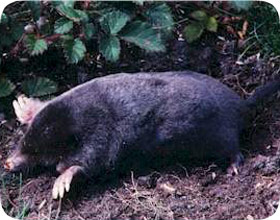 Moles are small, blind rodents. Their streamlined bodies and strong, clawed forelimbs help them move quickly and efficiently through the soil. Since they spend most of their lives under the ground, they have large lungs and blood that helps them survive under the ground for long periods of time. These little pest feed mostly on earthworms and insect larvae, especially the larvae of Japanese beetles.

While you may have holes and tunnels going through your yard, it may not be a mole. The culprit could be a pocket gopher, and gophers will take other methods of removal. So, how do you tell if your yard has been invaded by a mole or a pocket gopher?

Looking at the mounds of these animals is the best way, if you can’t get a glimpse of the animal itself. The mound that a mole makes is more circular and volcano shaped, and the soil around it is clumpy. A pocket gopher’s mound, on the other hand, is flatter with dirt thrown in one general direction. The soil around a gopher hole is also finer.

Now that you’ve figured out which animal is ruining your yard, you probably want to get rid of it. There are a few method for this task – some have been proven to work, and some are controversial.

Mole traps are put into a mole tunnel to trap and usually kill the little invader. Although this method is not exactly humane, it is the most effective method. These can be purchased at any lawn and garden stores or large department stores. Be sure and check the traps at least daily, if not more.

Different types of traps that will most likely kill a mole are harpoon traps, scissor traps, and choker loop traps. These can be place in active tunnels and around entrances. If you would rather not kill the little bugger, but remove it, a pit fall trap can also be used.

With a pit fall trap, you can catch moles and release them far away from your home, if you’re looking for a more humane method. To make a trap of this sort, dig into an active tunnel. Dig another hole on the bottom of the tunnel large enough for a large jar or coffee can to fit in. Make sure that the jar is in deep enough to be level with the ground. Cover the hole on top to keep any light out.

There are a number of other different methods that people claim will get rid of the moles in your yard. These methods are not proven, so some of these methods may work and some may not.

One method that some people swear by is using moth balls. Poke holes in active tunnels every foot or so and push a couple moth balls in. They can also be put at tunnel entrances. The moles should vacate the tunnels within a few days.

Moles do not like the scent of humans, so the odor of hair and urine may also make them leave. Hair pulled from a brush or hair clippings from a barber shop stuffed into a mole tunnel may work. Urine can be poured into mole tunnels, but some more squeamish people may not want to use this method, and for good reason.

Some people try to flush out moles with water. This method is probably very memorable for some, as it was used in the movie Caddyshack by Bill Murray when he tried to flush the gopher. Simply put the hose into a mole tunnel, and turn the hose on full blast. In theory, the mole should leave. Many times, though, if this method is used, he may return.