Do It Yourself Home Security Systems

Hard times make for hard men, and hard men will take what they need to survive. Home security is an important issue for anyone with something to lose. Protecting the family, possessions, and home cannot be left to chance. A home security system, installed by professionals, can be expensive. But a reasonably intelligent homeowner can install his own system. It is just necessary to do some thinking about it before starting.

It’s called home security, but it can apply to any structure that contains valuables. This can be a house, garage, apartment, or mobile home. No matter how diligent the police are, they cannot be everywhere at once. Protecting one’s family and valuables is the homeowner’s job, and his alone. So, what is involved in setting up a do it yourself home security system?

Home security has layers, just like military security. The first layer is the perimeter. This should consist mostly of motion-sensing lights all around the house which report to the central alarm station. It should also include a driveway sensor to warn if someone uses the driveway. None of these costs more than $100. 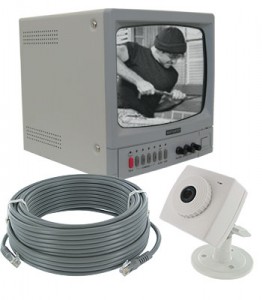 The central alarm station is located in a secure position inside the home. Some folks like to hide it in a closet, some want it right in the master bedroom. It should be readily available in the event of an emergency. Central stations have a number of functions, but their primary function is to gather the signals from the self-installed sensors around the home. In the event the alarm is triggered, the station will know which sensor was triggered. For a do it yourself installation, all of these sensors should report to the central station through a wireless connection. This makes installation simpler, and renders the system less vulnerable to attack. Central alarm stations available to do it yourself installers can handle from 4 to 96 separate sensors, which are referred to in alarm-speak as “zones.’

Choosing a system really amounts to choosing the central station. A basic system will consist of a central station, a keypad, and several motion sensors. Starting price on such systems can be as low as $100, but one should probably buy a more flexible and larger system. Larger systems are very reasonable in cost at around $250. Planning the next layer of security can then commence.

The second layer of security is the walls of the house. In order for someone to steal from the home, or harm the residents, he has to get inside. Most security companies will cover all of the entrances with motion detectors. This is primarily because of cost. Using a motion sensor in each ground-floor room is inexpensive. Wireless motion sensors are priced between $60 and $80 each, and a half-dozen will cover the ground floor of most homes. If pets are to be considered, they sell a pet-immune motion detector for around the same price. Still, it is a good idea to use magnetic contact sensors on all of the exterior doors. They are only about $30 each. This includes all exterior access to the basement or garage, if those areas have access to the house. Keypads should be placed inside any exterior door that can be used for entering or leaving the home.

If all of the bedrooms are upstairs, and all residents are responsible enough to trust with operation of the security system, the upper floors can be partitioned from the ground floor. This allows the residents to move freely about the upstairs while the ground floor alarm is activated. Anyone entering the home would immediately trigger the alarm, alerting those upstairs. All this requires is an additional keypad in the upstairs hallway. Since this is a do it yourself home security system, there is great flexibility in the design. Once the security system is installed, the homeowner may put it to a number of uses other than simple home alarm.

Security isn’t just prevention of theft or assault. Do it yourself home security systems can act as central smoke alarms, accepting the input of up to 16 smoke detectors at around $60 each. Carbon monoxide detectors can also be attached for around $80 apiece. Flood detection alarms, useful in bathrooms as well as basements, are inexpensive at around $50 each. There are lots of other bells and whistles available to the gadget-minded homeowner. Key-fob remotes that are programmed to deactivate the alarm without using the keypad are one. There are even proximity key fobs that automatically turn the alarm on or off when the holder is a certain distance from the house. These are generally around $40.

To get the maximum benefit from the self-installed home security system, a monitoring service is needed. Systems can communicate with the monitoring service, or with the homeowner via his pager, e-mail, or phone. Systems can call out on a land line, the internet, or over a GSM cellular wireless connection. This last, when combined with built-in battery backup, makes it impossible for a thief to disconnect the system. In addition, most insurance companies will offer up to a 20% reduction in premium to the homeowner whose alarm is being monitored. Although the do it yourself home security system can’t connect to ADT or Brink’s, there are monitoring systems that are happy to deal with any homeowner. The cost is surprisingly cheap, around $120/year. Having someone monitoring the alarm affords peace of mind when residents are away for extended periods. House-sitters must, of course, be thoroughly briefed on the operation of the system.

Protecting the home has never been more necessary than it is today. And, due to the ease with which the homeowner can install his own home security system, it has never been simpler. Radio Shack, Sears, home improvement centers, and a number of on-line sellers have everything that is needed, including advice and instruction.