How To Cook Fresh Corn? 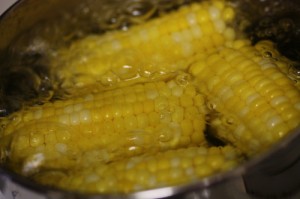 Fresh corn is a staple of summer outdoor cooking. It can be boiled, baked or grilled on the cob or removed from the cob and used fresh or cooked to go along with almost any meal. Fresh corn is a healthy side dish, inexpensive, and is very easy to prepare. Fresh corn also goes well with stir fry or in a cold salad.

Boiling fresh corn on the cob begins by preparing a large pot of water. While the water boils, shuck the corn, which is done by removing the outer husk and inner silk. After the water has reached a hard rolling boil, carefully lower the ears of corn into the water and add a teaspoon of salt. Cover with a lid and allow to cook for up to ten minutes, depending on the size and thickness of the corn. Once the corn has cooked, remove with tongs and allow to cook slightly before serving with butter.

Corn can be grilled in the husk or shucked as desired. When grilling with the husk on, peel it back far enough to baste the corn with butter then pull the husk back into place to allow it to steam. Grilled corn should be watched carefully to avoid the husk catching fire or burning the corn. It can take between eight to fifteen minutes to full cook an ear of fresh corn on the grill. The corn will stay hot for up to thirty minutes if the husk is left on.

Baking fresh corn on the cob can be done with the husk left on or removed similar to grilling. Often corn is baked inside of an aluminum pouch to allow it to steam cook. Prior to baking, it is important to coat the fresh corn in either butter or some form of marinade or topping to prevent it from drying out. Bake at 350F for up to twenty minutes, for large ears of corn, or up to twelve minutes for smaller ears.

Corn that has been removed from the cob can be pan fried lightly in oil. First heat a pan then add the corn and a small amount of oil to it, stirring frequently to allow the corn to cook evenly. The corn often will be fully cooked within five minutes, but may take longer as temperatures and oil used may vary. If desired, mix in a marinade or other flavoring while the corn cooks.

The Rookie Cook: How to Cook Corn on the Cob