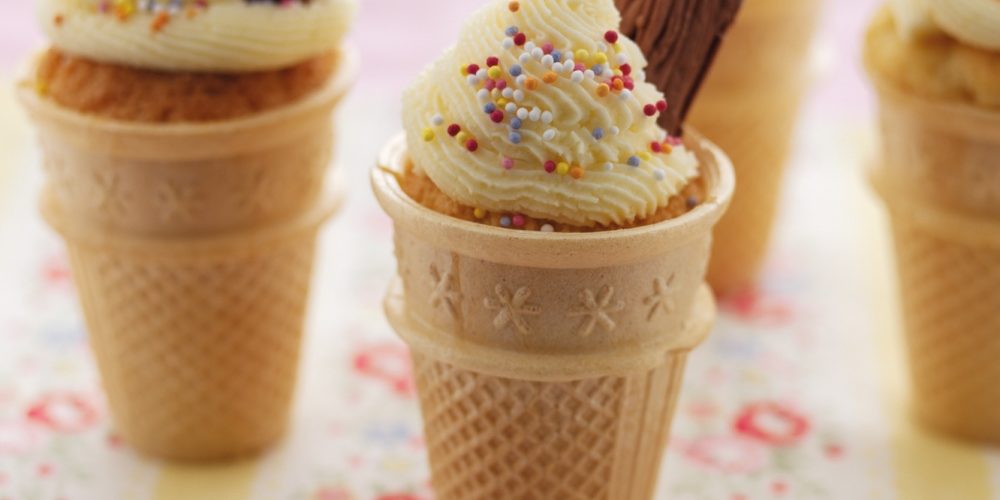 Ice cream cone cupcakes are a cute treat for all ages, but children especially love them. They’re also very easy to make, and because of this, have become a popular treat for parents to bring to school when celebrating a child’s birthday. There are many different ways to bake ice cream cone cupcakes, and some are more festive than others. Regardless of the desired effect, all of the recipes are easy enough that even a beginning baker can master them.

The most basic ice cream cupcake recipe is done with a simple box cake and ice cream cones. Start out by preparing the box cake using the ingredients listed on the back and stirring the batter until all the lumps are gone. Next, take out a cupcake pan and line it with paper cupcake tins. Spoon the cake batter into the tins until they’re filled about half way. Finally, take the ice cream cones and stick them about halfway into the cake batter so the bottom end is sticking straight up. The cake will rise into the ice cream cone as it cooks. Bake the cake according to the directions on the box and allow the cupcakes to cool for at least 30 minutes. To frost, simply peel off the cupcake tin and decorate.

Turning cake batter rainbow colored is another fun way to make ice cream cone cupcakes even more special. To do this, purchase a vanilla cake mix and prepare the batter according to the directions on the box. Before spooning the mixture into the cupcake tins, separate the batter evenly into six small bowls. Add a few drops of food coloring to each bowl so the batter turns red, orange, yellow, green, blue, and violet. For brighter colors and a fruity flavored cake, Jello powder can be substituted instead of food coloring.

Once the batter has been colored, add a small spoonful of each color to the cupcake tins. The colors will layer as the cake bakes and create a rainbow appearance once the treat is bitten into.

Funfetti cake cones can be made by purchasing a funfetti cake mix or by adding sprinkles to a regular cake flavor. For example, regular funfetti cake only comes in vanilla, but a homemade chocolate version can easily be created. Simply prepare the cake according to the directions on the back, then add a half cup of jimmie sprinkles. Bake the cupcakes the same as above and when bitten into, the cake will have a brightly colored dots inside.

Frosting With A Knife

Once the cupcakes have cooled, it’s time to frost them. There are several ways to frost ice cream cone cupcake, but the easiest is to use a knife. The frosting can either be store bought or homemade depending on personal preference. To frost, simply use a butter knife to spread the frosting evenly on the top of the cake. If the cones don’t have a flat bottom, they can be placed in a clear plastic cup to make the process easier. This is also a great way to deliver ice cream cone cupcakes to a classroom. Not only does every child get their own cup, but the cups can also be filled with other fun treats, such as candy or sprinkles.

Frosting With A Bag

Frosting ice cream cone cupcakes with a bag is more challenging but creates the appearance of soft-served ice cream instead of just frosting. To frost, pour the frosting into a Ziploc bag and cut off one corner. Carefully create a swirling design by squeezing the bag and moving it in a circular motion. A similar method can be seen in the video below. Repeat until all the cupcakes are frosted.

Since ice cream cone cupcakes are supposed to look like ice cream, they often have the same toppings that a sundae would. The exact toppings depend on personal preference, but usually include sprinkles, chocolate chips, crushed candies, M&Ms, or cherries.

Ice cream cone cupcakes can also be made by placing a flat-bottom ice cream cone in a cupcake pan and filling it with 1/4 cup cake batter. This method is rarely used now because the cones have a tendency to spill or overflow in the oven.

Whip cream or pudding frosting may also be used on the cupcakes to make them taste even more like real ice cream.