How to Adjust the Time in a Convection Oven? 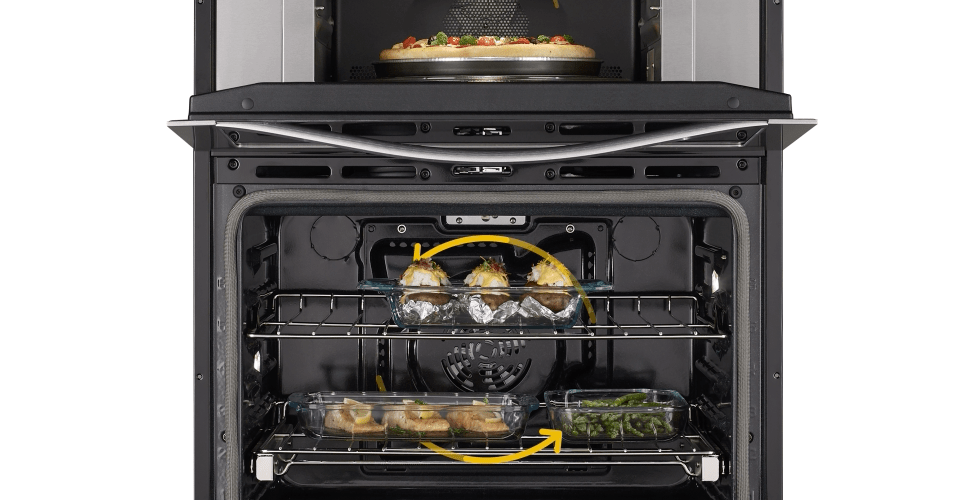 The convection oven is considered to be a modern miracle by many professional cooks. Convection ovens cook foods faster and more evenly, resulting in more tender meats and perfect baked goods. These ovens also cook foods 25 to 30 percent faster than conventional ovens, which makes them a blessing for a professional kitchen. Because convection ovens have a reputation for being easy to use and producing perfectly cooked foods, many home cooks have been getting into the act and buying their own convection ovens.

Convection ovens cook foods faster and more efficiently because they cook foods differently. Conventional ovens use radiant heat from its two heating elements to cook food. Because there is no air circulation, hot and cold pockets develop in conventional ovens, resulting in foods that are cooked unevenly. Convection ovens, on the other hand, produce heat in a chamber behind the main part of the oven. Then, a high-powered fan blows the hot air into the oven. The fan circulates the air, cooking the food more quickly and evenly.

Because convection ovens rely on air flow for cooking, they require special baking and roasting pans. These pans have lower sides, allowing air to flow over the food. High-sided pans meant for conventional ovens block this air flow, which will prevent the food from cooking effectively.

In addition to choosing the right pan, you must be careful to place the pan in the center of the rack, allowing 1.5 to 2 inches of space around the pan. This will help the air circulate effectively around the pan. In addition, do not cover pans with a lid or with foil, because they will block the air flow around the food.

Another method that many cooks use to adapt recipes to a convection oven is to reduce the cooking temperature by 25 degrees. This method enables you to use the same cooking time, which is a benefit if you are not good at math and have difficulty figuring cooking time adjustments. Many cooks also prefer this method when they are cooking meats, because in general, the lower the temperature and the more slowly the meat cooks, the juicier the meat will be after it is fully cooked.

Many cooks prefer to reduce both the time and the cooking temperature slightly when using a convection oven. This method may be more complicated to figure out, but overall it is the most successful method for many convection ovens when you are cooking baked goods or meals that contain more than one ingredient, such as casseroles.

Each convection oven is slightly different. As a result, it is important to read the manufacturer’s guidelines before you use your convection oven. This will help insure that you get optimum results each time you cook.