How To Cook Lobster Tails? 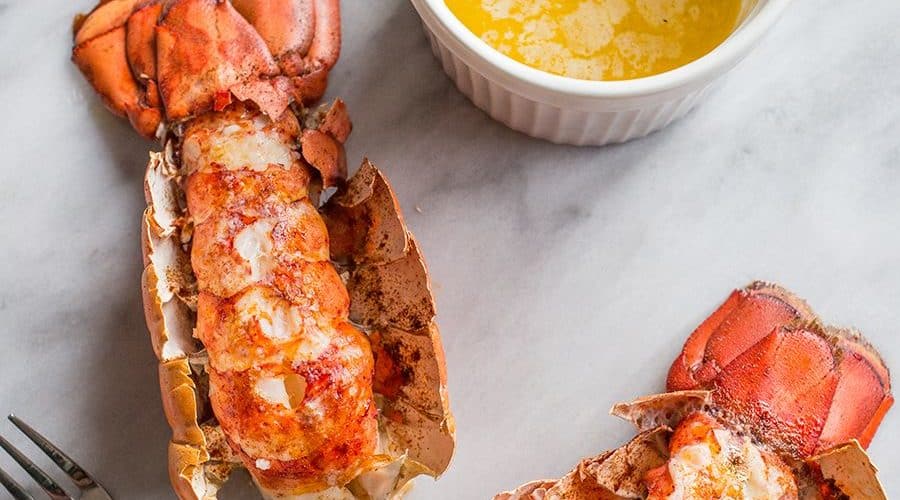 Lobster tails are a delicious treat, although generally an expensive one. To avoid ruining the lobster and wasting money, it is important to cook the tail properly. While it is desirable not to overcook the tail, it is absolutely crucial to avoid under-cooking it. One way to make the lobster tail be more forgiving if slightly overcooked is to leave the shell on. Before cooking the lobster, the entire tail should be rinsed off well under cold water. On the bottom side of the lobster, cut down the thick membrane with a sharp knife, cutting a slit in the flesh as well. Flesh may then either be removed from the shell completely or just loosened. To loosen the flesh, place the pointer finger between the flesh and the shell near the cut and run the finger firmly along all inner surfaces of the shell. If any blue, purple or green spots are visible, discard the lobster immediately. There are a few different ways to cook a lobster tail with delectable results:

1. Baking In The Oven

Lobster tails may be purchased in several different sizes, so cooking times will differ. A helpful guide for different tail sizes and times may be found here: Lobster Help: Baking Lobster Tails. Generally lobster tails should always be baked in the oven at 400°. Lobster cooks very quickly and in order to sustain the moisture in the flesh, baking at a high temperature is necessary. Place a sheet of foil in a baking dish or pan, then grease it well. To season the lobster, mix the following in a bowl for each tail: 1/2 tablespoon of melted butter, juice from 1 lemon wedge and 1/8 tsp pepper (optional). Powdered lemon-pepper seasoning may be substituted instead. Open the sides of the membrane and drizzle the mixture on the inside. During the baking process the membrane will trap moisture and flavor in the tail’s flesh. Bake it in the oven according to the referenced guide or for about 10 minutes as a general rule. When the lobster is done, it will look white and have an opaque swollen appearance.

To steam a lobster tail, it is best to place a skewer fork down the middle of it to prevent curling during steaming. In a large pot, fill water to about 1 inch in depth and add a pinch of salt. Place a steamer or rack in the bottom of the pot, ensuring it will sit about 1/2 inch above the water. Bring the water to a boil and place the tails on the steaming rack. The skewer sticks will likely extend out of the pot, so try to cover it as tightly as possible. Allow the tails to steam for 8 or 9 minutes. For a more seasoned taste, steamed lobster tails may be served with a lemon wedge and melted garlic butter for dipping.

Grilling lobster is one of the best ways to yield a very moist finished product. Keeping the shell on while cooking will contribute to optimal moisture, but even if flesh is completely removed it will still be moist. To season the lobster, use this mixture for each tail: 1 tablespoon of olive oil, 1 teaspoon of lemon juice, a pinch of garlic powder and a pinch of salt and pepper. Roll the lobster in the mixture and place on a high-heat grill with a heavily oiled rack; the membrane side should face upward. Cook for 8 minutes, then flip it over and cook 5 minutes. If the shell is removed, flesh pieces must be grilled for about 6 to 8 minutes.