Subprime Mortgages are to Blame for Bankrupt US Cities 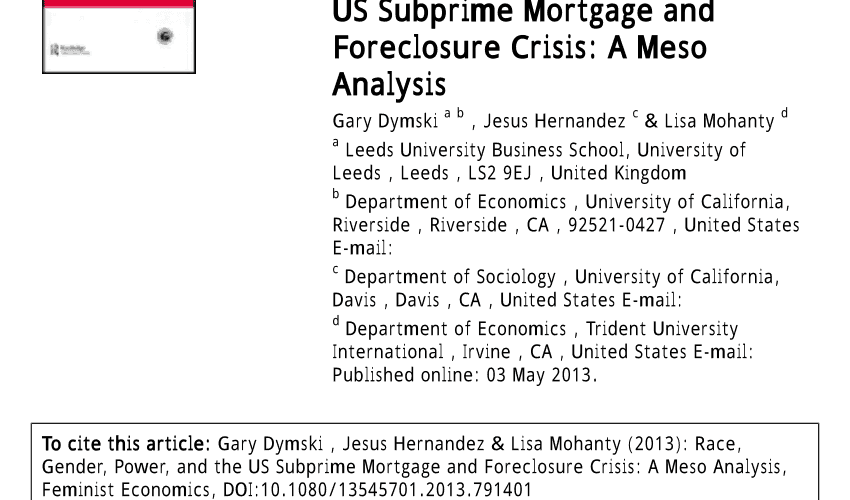 Everyone seems to be blaming politicians for the bankrupt cities in the US. But, in actuality, cities like San Bernardino and Stockton have been brought down because of the housing bust. If anyone’s to blame, it’s the banks who peddled those “subprime” mortgages to homebuyers that couldn’t afford them. The cities that have filed bankruptcy were severely affected by the biggest housing busts in US history since the Great Depression.

The commentary and reporters have been talking about the bankruptcies filed by California cities for the last month. People reading and watching their reports are getting the impression that city officials and municipal unions are to blame. They’re being told that the spending habits of the local officials are what led these cities to economical failure.

But, this isn’t altogether true. Yes, they should have seen it coming when foreclosure rates increased while home values declined. They could have been better prepared for the ripple effect that was destined to happen due to the housing bubble bust. But, the true villains are the banks that issued subprime mortgages to buyers using their “no docs” policies knowing it would lead to foreclosures in the end. Their “no doc” policies allowed borrowers to buy homes with mortgages they simply couldn’t afford.

San Bernardino and Stockton have suffered major financial losses due to extremely high foreclosure rates. Every foreclosure became another home that they could no longer collect property taxes on. Then, there’s the decrease in home values. Remember that property taxes are calculated based on the home’s current value. The lower the value, the lower the amount of property tax the homeowner pays.

Then, there’s the ripple effect that’s caused by an increase in foreclosures. These people have to relocate, often moving out of the area. And, since lenders have made it much harder to buy a home, there are very few new homebuyers moving into the area. That means less money being spent in the community. Less spending means less sales taxes being paid. It also leads to companies closing down and laying off workers in order to downsize. Fewer good jobs also leads to less spending and sometimes, relocating. And, the cycle continues.

The Epicenters of the Housing Bust

No one’s suggesting that San Bernardino and Stockton weren’t victims of unnecessary spending by politicians. But, one thing people need to keep in mind is that these two California cities were at the epicenter of the US housing bubble. For years, California homebuyers flocked to these areas. People from all over California were happy to purchase larger homes at prices much lower than what cities like San Francisco and Los Angeles were offering. This brought so much money into these cities that it’s no wonder their local officials thought they were financially secure for life. However, when the mess hit the fan, these cities also ended up at the epicenter of the US housing bust.

Stockton is a working-class Central Valley community located outside the suburbs of San Francisco. And, San Bernardino is a working-class Inland Empire community located outside the suburbs of Los Angeles. Before the housing bust began in 2006, both of those communities experienced a wave of housing construction. They also experienced a swarm of home sales to non-qualified buyers who were enticed by subprime mortgages. That’s why they were so deeply affected when the housing bubble burst. The housing bust caused both cities to reach record numbers of foreclosures causing a sharp decline in housing construction, one of their biggest employment industries.

Here are some statistics that prove the true cause of the bankruptcies of these California cities:

These are the facts, according to the California Association of REALTORS (CAR) chief economist, Leslie Appleton-Young:

Let the Facts Speak for Themselves

And, it all started with the subprime mortgages. Lenders knew the bottom would fall out one day. But, at the time, they just didn’t care. The excitement of closing record numbers of escrows, took precedent over the affect these mortgages would have on the future of the US economy. When it comes to blame, we must remember that there’s a “cause and effect” to all failures. The subprime mortgages were the cause. The bankruptcies of cities like Stockton and San Bernardino are the effect. And, those are the facts.