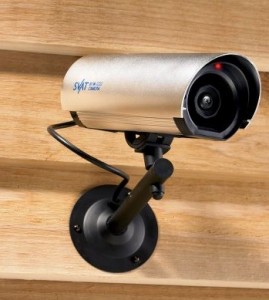 Home security camera systems are becoming increasingly popular for several reasons. They offer affordable and flexible monitoring, both inside and outside homes that can be viewed in many different ways by the homeowner or by a third party, for those using a security service. This guide lists each type, explains the features, advantages and any drawbacks for each home security camera and gives an idea of prices for each kind.

A digital or analogue camera placed in a location of the homeowner’s choosing shows all of the activity, all day and night. This allows continuous monitoring of children, older family members, caregivers and trades people who come near a home, s well as the ability to screen for potential intruders.

Wireless home security camera systems send signals of the pictures through walls to a control center where they are viewable on a computer, mobile phone, TV or at the office of an external security company. Images recorded by the cameras may be saved in various formats such as VCR, DVD and in files kept on a computer hard drive.

Taking time to consider all the variations available will result in a system that may be a combination of all types of security cameras, but also one that matches a homeowner’s needs exactly.

Cameras that reply on mains electricity (wired) are becoming old fashioned, as wireless models, using long lasting and rechargeable batteries take their place, because prices for wireless ones are lower than when they were first introduced due to innovations and mass production. Cameras using batteries posses a big advantage during power outages, because they keep recording, providing a source of light is present.

Wireless cameras may be moved around more easily than their wired relatives and are easier to hide without trailing wires. Wired cameras are cheaper and may be a good option for home security systems that rely on cameras mounted mainly on the house, or close to it, and are considered easier to use for those without a basic knowledge of computers, because no software is needed.

The ideal location has two features. The first being a placement which permits a good view of faces of any that approaches the house or its surroundings. The second requires any camera is set up high enough that interference with its operations is impossible for intruders. This can make it harder to service, but ensures it remains free from any tampering or blocking attempts. Popular locations include inside light fixtures, under the eaves of a house, and concealed by trees and shrubs, or other landscaping features.

Another feature people like about wireless cameras involves their easy installation, typically two screws secure a plate in which the camera sits. Problems with cheap home security camera systems include lighting issues. These are solved by deciding on the area of instillation, looking at the lighting it offers, in day and night hours, then finding a way to increase it, if necessary. The simplest method of solving this issue is buying a wireless camera which uses a motion sensor to switch on lights and record when any movement triggers it. Other possibilities involve adding separate lighting, sensor types are preferred because they offer economy and provide an alert when they switch on.

About Distances for Signals

Wireless cameras do have some limits on the distances they can transmit images, so it is wise to read all the specifications and ask any questions, before purchasing a whole system. A lot depends on the location of the receiver, located inside the house. Some experimentation will be needed to get the optimum results.

Materials used in the home’s construction may slow signals down, or weaken them. Wooden and other thinner materials interfere with signals less than brick, concrete or metal walls. The solution usually involves buying a system with a more powerful transmitter, so retain any receipts of purchases for returns of incompatible systems, and make sure the vendor will accept at least an exchange, if that turns out to be the case.

Deciding how many cameras will be used is an important part of the process. Up to 30 or more may be supported on a larger system, and a smaller one can be backed up by wired versions closer to the house. If the location or local laws require you install no additional lighting, look for cameras which perform well in low light conditions. (A photographer friend can often be of help at security camera buying time, as they are familiar with many of the questions asked by those new to this subject)

Wireless cameras used for home security may need an encryption device. This prevents any intruders hacking into the signal, by encoding it in a way that cannot be broken into. Criminals can hack into your wireless internet service from the street, and stealing your information. Cameras with this device as a built-in feature are more expensive, but the added protection is well worth the extra money.

This system enables homeowners to view the images the cameras see. The simplest one is via a mobile phone connected to several cameras. More complex versions involve receiving images via broadband WiFi service, viewable wherever a signal is received. This means that homeowners possessing laptops fitted with USB WiFi or other WiFi services can track home activities 25 hours a day, if they wish.

Each type of camera that uses it offers software packages, along with some third party systems. If it seems too complex to install for any homeowner, consider having a professional security service do the work and ask plenty of questions. The images can take up quite a bit of space on a computer hard drive, so when installing a new system, check there is sufficient space and that older images are deleted after a set amount of time.

Depending on what the requirements are, a system can cost from $100 upwards. One camera may cost as little as $30, another with added lighting and motion sensor, as much as $250 at the top end of the market. Packages offering several cameras and software, or a mobile phone are the best deals, with costs from $200 to $600 and higher. Additional cameras can be purchased as and when required, and it is recommended to add a few very convincing fake cameras into the mix, to confuse criminals, costing less than $20 each.

With a little research and practice, anyone can posses a very effective and reasonably priced wireless home security camera system.