How To Cook Frozen Lobster Tail? 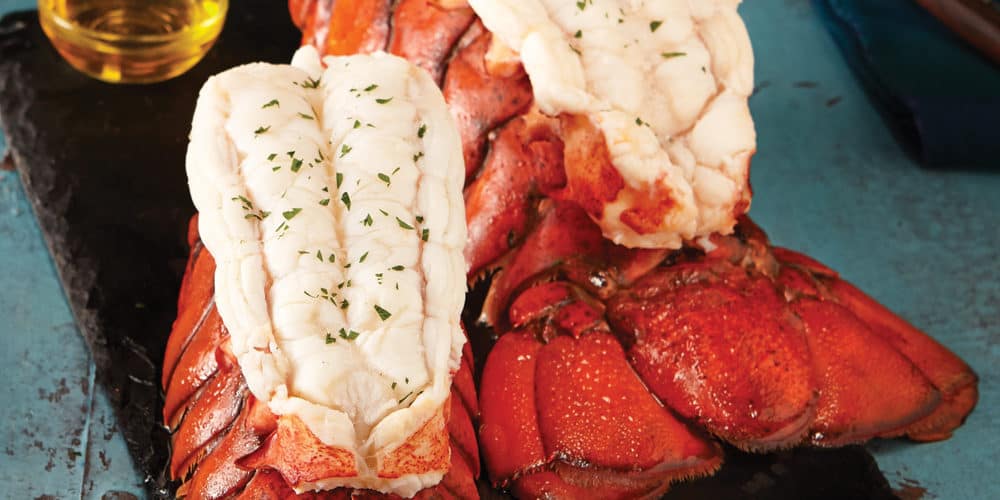 There’s a wealth of ways to cook frozen lobster tail. Frozen lobster tail has an edge over freshly caught lobster: there’s no dealing with the worry of retaining freshness before cooking. With frozen lobster tail, the cook is free to engage in an adventurous gastronomic journey to the of family and dinner guests. Make certain that frozen lobster tail is “fresh frozen”. This simply means that it has no freezer burn from long-range freezing. If lobster tails have been frozen for too long, the result in recipes can mean stringy or dry lobster meat.

Frozen lobster tails are handy because they can be kept frozen until ready for use. Although, they shouldn’t be kept longer than 14 days in the freezer. Frozen lobster tail can be steamed, broiled, baked, stewed or fried. The most popular way to serve frozen lobster tails is to steam them and serve with drawn butter. For baking, consider wrapping foil around each tail to preserve natural juices. Simply split the shell through the center of the underside with poultry shears. This makes it easier to scoop out the meat later. Spritz with lemon juice and a little butter and cover with the foil. Bake for about 8 minutes or until the meat has lost its translucence and appears a lovely pearly white. Baking time may vary with different ovens.

It takes about three frozen lobster tails to make lobster fritters. Allow the lobster tails to thaw. Remove the raw meat from the tail. Chop lobster meat into tiny chunks. In a large bowl, place lobster meat, a cup of flour (more depending on number of servings), 1 well beaten egg and a teaspoon of baking powder. To this, add finely chopped onion and garlic, freshly chopped dill and tarragon, a dash of cajun seasoning or chili powder and hot sauce. Blend until the measure holds together. Shape into patties and coat with bread crumbs. Deep fry or saute in butter.

Frozen lobster tails are a great way to serve lobster stew on cold, mongrel days when rain or snow is coming down and wind is blowing wildly. All you need for a tasty lobster stew is cubed potatoes, diced celery, onion and garlic, a dash of white wine, a whisper of freshly chopped parsley, tarragon, thyme and sage and enough milk and half and half cream to create a broth. One tip for lobster stew:

Steam the lobster tails briefly in their shells.
Remove the shell from the meat and discard.
Retain the juice as the base for the stew.

Use the base to cook the potatoes and other ingredients to tenderness and then add the milk and half and half cream. Chop the lobster meat into good sized chunks. Add the lobster meat last as it is already steamed.

Frozen lobster tails can be a good way to put a dinner together in a hurry. Allow the tails to thaw. Marinate them in a bath of soy sauce (Caribbean or Oriental), lime juice, crushed garlic, and cayenne pepper for about 15-20 minutes. Place them on a baking sheet and broil for approximately 5 minutes or until done. Serve with salad, rice or pasta.