How To Get Rid Of Voles In Your Yard? 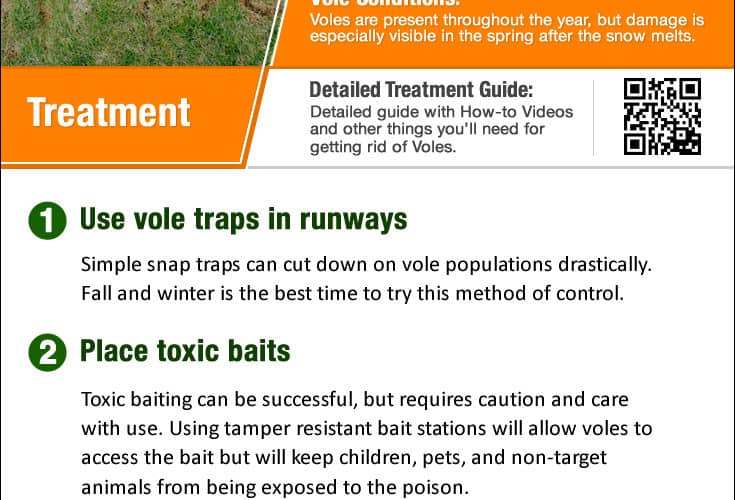 A vole is a four to five inch rodent-like animal, that is also referred to as a meadow-mouse. While voles are cute, innocent-looking creatures, they can cause quite a bit of damage to yards and gardens. If left alone, voles will burrow into a yard, causing a number of tunnels and trail-like markings around the property. If this weren’t bad enough, voles reproduce at impressive rates, which will lead to an abundance of the creatures inhabiting a yard in a few short months. This is why it is important to effectively remove voles from a yard at the first sign of infestation.

Rid Your Yard Of Voles In Four Easy Steps:

1. When ridding your yard of voles, it is important to first be sure that your yard is, in fact, inhabited by the creatures. According to All State Animal Control, the signs of vole infestation are as follows:

– Trails running throughout a yard.
– An abundance of green vole droppings that later turn gray if they are left to dry.
– Flowers, plants, and trees that appear as if they are being eaten by a small animal.
– A number of small holes throughout a yard. These holes are entrances to underground tunnels used by
the voles.

These signs, which can also be viewed at www.AllStateAnimalControl.com, are indicative of a vole infestation. In addition, it is important to be sure that moles are not the problem. Moles do not eat plants. Therefore, if plants and gardens are being eaten, then voles are the problem. While moles also burrow and dig tunnels, they do not eat plants or destroy gardens, which is why many people choose to simply leave them alone.

2. After you have determined that you do indeed have voles in your yard, you may choose to trap or poison them. If you choose to trap the voles, a simple mouse trap will do. First bait the mouse traps with peanut butter or other scraps and place them outside of the entrances to the tunnels. If you have small children or animals that are frequently in the yard, it may be advisable to cover these mouse traps. Simply do so by placing a pail or other container over the entrance of the tunnel and the trap. To further weigh down the trap covering, many gardeners will choose to place a heavy object or stone on top of the pail to ensure that it is not disturbed.

3. If you are adverse to using traps, a repellent or rodenticide may be used. One effective repellent is castor oil. Simply place the castor oil outside of the tunnel entrances. This will repel the voles, and with any luck, get them to relocate. If this does not work, a rodenticide may be needed. One great product is ZB Rodent Bait. This comes in the form of small capsules that are also placed outside of the tunnel entrances and inside of the tunnels. These capsules will be eaten by the voles, which will ultimately lead to their death. While this is a less pleasant option, it may be used in the case that nothing else seems to work.

4. Once the voles have been removed, the yard should then be vole-proofed. This can be done by simply getting a cat to patrol the area. However, if the homeowner is not in need of an additional pet, other measures can be taken. Place wire wages around the case of trees to limit a vole’s food source. In addition, homeowners that frequently suffer from vole infestations may want to enlist the help of a gardener. By cleaning up a yard, voles will be less likely to find the area a suitable place to infest.