How To Get Rid Of Moss In Lawns? 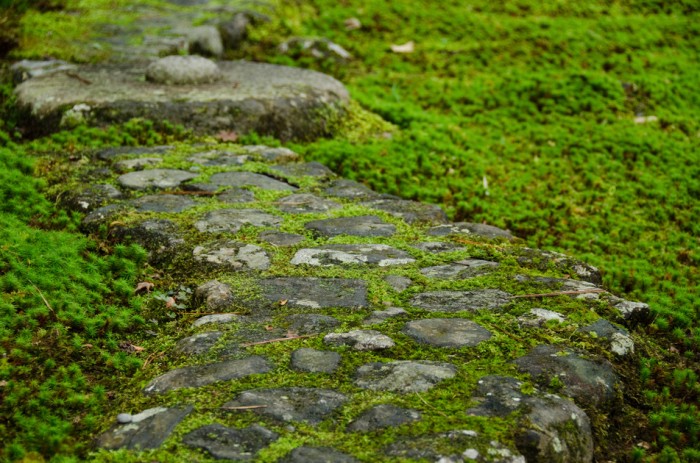 To some people moss acts as a good cover in shady areas, but to the majority of gardeners it is a nightmare, usually taking over a patch of ground where there should be grass. The reason it is a nightmare intruder is not because it is hard to get rid of, but rather because it is difficult to find a method to keep the moss from returning as it does year after year.

The best way to get rid of moss in lawns is to first examine why it is there in the first place. Has this moss always grown in a particular area of the lawn? Has the moss been there for just a couple of years, or more recently sprung up in the past few weeks, or months? If moss has appeared very recently then it is likely that it is due to traffic.

Compressed soil can suffocate grass roots which means the grass will die, and thin out leaving room for the invasive moss to grow in its place. A good example of this is one that everyone has seen at some point; when a vehicle is parked on some grass for more than a few days the grass will turn yellow and die. This is due to the lack of sunlight, and also the compressed earth killing off the grass.

If moss has been present since you moved into the property, or has been around for years it could be because it is a very shady part of the lawn. The lack of nutrients in the soil means that grass cannot grow, again leaving it open for the moss. Soil ph levels could have a lot to do with moss growing instead of grass, as can poor drainage. Once we have established why the moss is growing in the lawn instead of grass. We can then start to rectify the problem for the long term.

A very shady area due to a large tree, or heavy bushes can be remedied by selective pruning. In some rare cases excessive pruning may be the answer to allow enough sunlight to reach the patch of lawn. With this method this will help for the grass to grow back thicker, and help to not give room for the moss to take hold again. Another method to stop moss returning is to aerate the lawn on a regular basis. This gives grass roots the oxygen levels needed to stay healthy. Over watering can also lead to moss growing which is avoidable by watering less often, and especially not at night when most people prefer to water lawns.

Now we know what the cause of moss growth is, so how do we get rid of moss in lawns? Quite simply raking will get rid of moss, as it grows on the surface. Moss has no roots which is why it can spread so quickly. You can easily remove it using a rake, or even pull it up with your hands in clumps. The biggest problem with moss is not actually how to remove it, but how to keep it from returning which you can do using any of the above methods.

Another alternative to rid moss from your lawn, and completely stop it from returning in the future is to use a moss control product purchased from most large hardware stores, or your local garden center. A good moss control product will contain iron or lime. Lime promotes grass growth if the lime level is low in the soil, and also raises the ph level. Iron kills moss, and also promotes grass growth. Once moss has been removed you should introduce, and encourage new grass growth by refreshing the top soil. You can also spread generous quantities of a well known brand name grass seed. Moss-out, and Rid-moss are two particularly effective moss control products.

Once you can re-establish your grass, you will find there will not be any future problem with moss growth. When looking for grass seed always check the date. Fresher bags of seed will have a much higher germination rate. Also check for the amount of weed percentage. You should purchase grass seed with .3% or less weed. You should now be able to enjoy your moss free lawn.